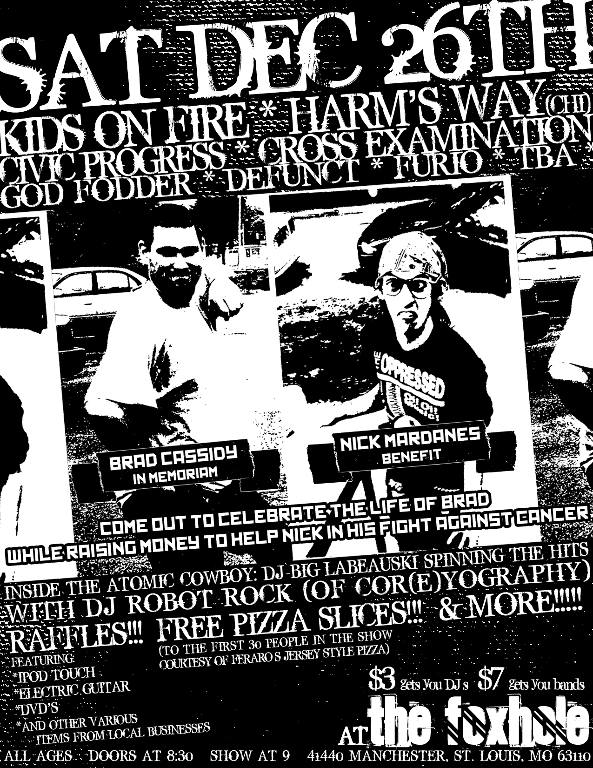 I tried to round up bands

I tried to round up bands that had something to do with Brad.  Cross Exam, God Fodder, Civic Progress, and Kids on Fire are all bands with members who wanted to be a part of this because they were friends with Brad.  Defunct is my band from high school.  This was around the time I first met Brad.  He and friends used to come to our shows.  My memory is a bit hazy, but I'm sure he used to heckle us.   Honestly, I don't know why I need to think about it because of course he did, that was Brad's thing.  He was doing it at the first and last show I saw him at (about a 10 year span)  The guy was consistent.  We used to compare him to the old guys in the balcony on the Muppet show.   If he liked your set, in between songs you'd hear from the back of the room, "PLAY THAT ONE AGAIN!" or "TOP SHELF!"  and when he heckled you it was usually just random stuff that was so ridiculous it was funny. "YOU LOOK TOO MEAN!"  "THAT SHIRT DOESN'T LOOK GOOD ON YOU!"

Cardiac Arrest is my current band.  When I say "my" band I mean MY band.  I do everything.  Brad was the original bassist for Cardiac Arrest or as he called it "Carter's Saggy Breast"  that may or may not have been coined by Chad, but Brad really drove it home.  Brad recorded the demo and played 2 shows then, in true Brad fashion, disappeared.  In fact he disappeared about an hour before our 3rd show.  Never showed up, didn't answer his phone and didn't even return our calls later.  I finally caught up with him like a MONTH later.  He acted like we never stopped talking.  "Hey Bruiser," as he would always greet me.  I said, "uh, what the hell, man? where've you been?? we thought something happened to you."  He just said with a laugh, "Eh, I didn't like the way the band worked." (I would show up with the completed songs and teach them to everyone)  He wanted to have input and have the band be more democratic.  We had to agree to disagree.

Furio is Brad's baby.  I'm sure most of you know Brad had a ton of songs on his comp or on cd's.  Before he moved to Chicago he would always go on and on about these songs he wanted to record.  He would ask anyone he knew that played music if they'd be interested.  I agreed to help, but for one reason or another it just never panned out.  Well Chad had the cd so we thought it would be a fitting tribute to play a handful of tunes.  The name Furio was Brad's idea.  It was in reference to, whom he felt was, the most badass character on the Sopranos.  Furio was the muscle brought in from Italy.  In one particular episode Tony and Furio are intimidating a doctor and Furio says, "You got a bee on you hat." and slaps the hat off the doctor's head.  When Brad would tell anyone about his "band" he would do this impression and lightly slap the head of whoever was listening.  Maybe it was to intimidate them to be in his band?? :-)  Found the scene: http://www.youtube.com/watch?v=OcPgxQkcIVs at 1:41.    Also during the Furio set we will be playing a song or two from Pound of Flesh.  Pound of Flesh was a band Brad and I had in the late 90's that never left the practice space.  I was going through the cd of songs and recognized one of them as a POF song.

Nick has been diagnosed with stage 3 hodgkins lymphoma.  I'm sure it's expensive enough with insurance, but Nick has none.  He was a good friend of Brad's.  He was one of the first people I called when I got the news about Brad.  I know Brad would've done anything to help him out.

today. you can. ride a bicycle. study tai chi. learn to play an instrument. let yourself be known. be kind to a stranger. show love & care. plant a tree. improve the world. read a book. try a new food. listen to music and sing loudly. learn to say hello in a new language. breathe deeply. laugh. give thanks for the day.

I WISH Brad was still really here so we could wish him a Happy Birthday.

Wow, you are going to be a Grandpa in March!